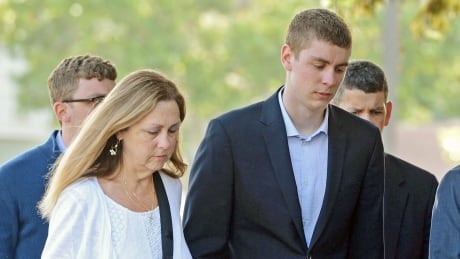 “As it stands now, Brock’s life has been deeply altered forever by the events of Jan 17 and 18,” reads the statement, in which the elder Turner argues that his son shouldn’t be sent to jail. “He will never be his happy-go-lucky self with that easygoing personality and welcoming smile.”And then, in what has become perhaps the most contentious part of the letter, the father attempts to explain why jail time isn’t a fair punishment for his son.”These verdicts have broken and shattered him and our family in so many ways,” he writes of the convicted sex offender. “His life will never be the one that he dreamed about and worked so hard to achieve.””That is a steep price to pay for 20 minutes of action out of his 20-plus years of life.”

One night in January 2015, two Stanford University graduate students biking across campus spotted a freshman thrusting his body on top of an unconscious, half-naked woman behind a dumpster. This March, a California jury found the former student, 20-year-old Brock Allen Turner, guilty of three counts of sexual assault. Turner faced a maximum of 14 years in state prison. On Thursday, he was sentenced to six months in county jail and probation. The judge said he feared a longer sentence would have a “severe im

Source: Embracing the Greatness of Muhammad Ali – The Atlantic

In the season finale Jenna’s friend said that Ceejai’ should go “pick cotton.” Then Jenna proceeded to call Ceejai’ “ratchet.” All of this boiled over to Ceejai’ attacking Jenna and leaving her with a Black eye. Ceejai’ gets kicked off the show, the fight goes viral and the show gets more buzz than any other time in years. All on the back of Black trauma.Real World has been around for almost 25 years and they’ve thrived on drama and conflict. Which is understandable because it’s a reality show. It’s just time for them to figure out some other way to manufacture that drama without using Black pain to get them there.And let’s remember that we’ve yet to see what happens in a season when White people are in a house outnumbered by Black people, let alone when there’s only one White person in a house full of Black people. It’d be interesting to see who looks “crazy” then.

Source: The Real World And Its History Of Exploiting Black Pain | Bossip

Black people have always been in the center ring on “The Real World.” Placing them in a house with six clueless white people and expecting things to go smoothly is always a recipe for disaster and entertainment. Bunim-Murray has profited off of this formula for 25 years. It’s time for a new formula.

It’s also true that the real rewards typically reaped for online success tend to heavily favor insta-celebrities who are white. Content derived from black users of Twitter, Vine, or Snapchat is often sidelined as part of a monolithic Black Twitter. Black users of social media often have a comparable—if not larger—effect on the digital conversation and create moments, pictures, jokes, and movements that deeply root themselves into the mass culture. Yet, as Payne’s success highlights, that’s often ignored when it comes to big payouts for fleeting social media fame.

Source: What Chewbacca Mom’s rise to fame tells us about race in this country | The Daily Dot